The LAPD is using computers to predict crimes before they happen.

Which fictional character shares your birthday?

Baby found alive in morgue hours after being declared dead.

Whatever happened to the iceberg that sank the Titanic?

The Office may get rebooted next season.

Tom Hanks to possibly star as Walt Disney in a film about the backstory on Mary Poppins.

A doctor reviews the science on House.

Kevin Costner really did ask Princess Diana to be in The Bodyguard.

For more information about this and other deadlines, see here. 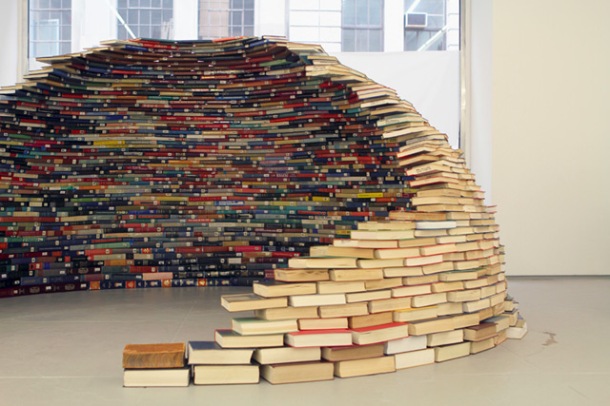 Most of the pictures in this post are of “Home,” a recent sculptural art installation by a very talented artist named Miler Lagos. You can find more information about this project here and here.

J.K. Rowling’s post-Potter book for adults has a title now: The Casual Vacancy.

The 10 most frequently challenged library books.

A video of Tao Lin reading a poem of his called, “Whale,” which may be the most annoying, clever, and also annoying poem in the world.

What do you think of the smell of a used book?

Watch 10 celebrities reading famous poems aloud, including Bill Murray reading a poem called “Another Reason I Don’t Keep a Gun in the House” by Billy Collins to construction workers below…

Watch a corgi get vacuumed.

John Cleese on how to be creative.

How to get tax breaks by doing things in space.

A guide to finding sunglasses for lesser known face shapes.

Physicists continue work to abolish time as the fourth dimension of space.

What a new study of the evolution of names  reveals about China.